“Synodality starts with hearing from the whole People of God. A Church that teaches must be firstly a Church that listens. Consulting all members of the Church is vital because, as the Second Vatican Council reminded us, the faithful as a whole are anointed by the Holy Spirit...

What characterizes a synodal path is the role of the Holy Spirit. We listen, we discuss in groups, but above all we pay attention to what the Spirit has to say to us. That is why I ask everyone to speak frankly and to listen carefully to others because there, too, the Spirit is speaking. Open to changes and new possibilities, the Synod is for everyone an experience of conversion.”

This phase of the process is a further listening to the responses of the universal Church.  The Oceania Church will gather responses to through the five bishops' conference including the NZCBC.

There will be an online Preparatory Event for the Continental phase.  Our Ocean Home has been scheduled for two hours on each day of November 28th, 29th and 30th from 5pm to 7pm NZ Time. This scheduling allows all participants to engage with and experience an online process of listening, discerning and conversation together. Please note that the sessions are not repeated but rather explore a different theme each session. The style and format of the Preparatory Event will be framed by processes of storytelling, reflection and theological dialogue, akin to cultural experiences of Talanoa or yarning circle style conversations. In the spirit of the synodal process, this event is open to all. Registration is now open. The objective of this phase was to consult the People of God so that the synodal process was carried out through listening to all of the baptised. This consultation concluded with a pre-synodal meeting,  the culmination of diocesan discernment. In the Auckland, the diocesan phase took place between October 2021 and May 2022 with responses  received until 13 May. The synthesis document was then sent to the New Zealand Bishop's Conference. The Synod on Synodality has reached the continental phase. The continental phase for Oceania involves the countries and territories covered by the Bishops Conferences of New Zealand, Australia, Papua New Guinea and Solomon Islands and the Episcopal Conference of the Pacific.

On 27 October the Holy See released the Document for the Continental Stage, which is the result of the discernment of all the responses received from around the world.

We now need to carry out a discernment process in Aotearoa New Zealand on this document. The results of our discernment will be integrated with similar documents from the other Bishops Conferences of Oceania. The resulting draft will be considered by the bishops of the region at the Assembly of the Federation of Bishops Conferences of Oceania in Suva in February, which will finalise a synthesis from Oceania to go to the Synod Office in March.

The discernment process on the Document for the Continental Stage has to take place between 19 October and 5 December, so that the New Zealand response can be ready by 22 December, so is more limited than that conducted at the earlier stage. There is just one process for the country, not separate processes for dioceses, religious orders and Catholic organisations. Because of the timeframe the process is being limited to diocesan and national groups, and religious congregations.

Document for the Continental Stage
Process for Spiritual Conversation

Responses are needed by Thursday 1 December. It should be in the form of 3-4 points, with a limit of 500 words in total. It is to be sent to [email protected]

Any group of people within the diocese are welcome to follow the procedures and submit a response.  Responses from individuals will not be accepted in this phase.

Of importance to note.

The Document for the Continental Stage is not a document to be amended, corrected or enlarged, but a true guide for an ongoing discernment, fruit of listening to the People of God. We ask you to use the Spiritual Conversation process which was widely used in the earlier stages, to prepare your response to the document. The Synod on Synodality is a process by which the Church listens.  To all voices.  As a result, the synthesis of all that has been heard in the diocese is complex and at times contradictory.

When reading this document, you are invited to do so with an open and compassionate heart.  It may contain ideas that you disagree with.  That is OK it is the voice of ‘the other’.

Instructions from Rome regarding the synthesis process note that:

The purpose of the synthesis is not to present a chronology of the stages of the synodal process that were followed, nor to draw up a report that lists indiscriminately all the points that emerged during the work. Rather, as the culmination of a communal spiritual discernment, the synthesis aims to gather and express the fruits of the synodal process in a way that is understandable even to those who did not participate, indicating how the Holy Spirit’s call to the Church has been understood in the local context.  Rome March 2022

The Diocesan Consultation phase has concluded with the submission of the diocesan response to the New Zealand Bishop's Conference.

The Church recognises that the timing of this consultation process was not perfect.  For the Church of Auckland, we were in lockdown and then limited in our face-to-face meeting capacity.   Therefore, we are extremely grateful to all those who gathered either in person or through technology to listen to others and respond.  This is not the end of the Synod process.  Being a listening Church is our way of being.  The practice we have had in participating will assist us going forward to be synodal. 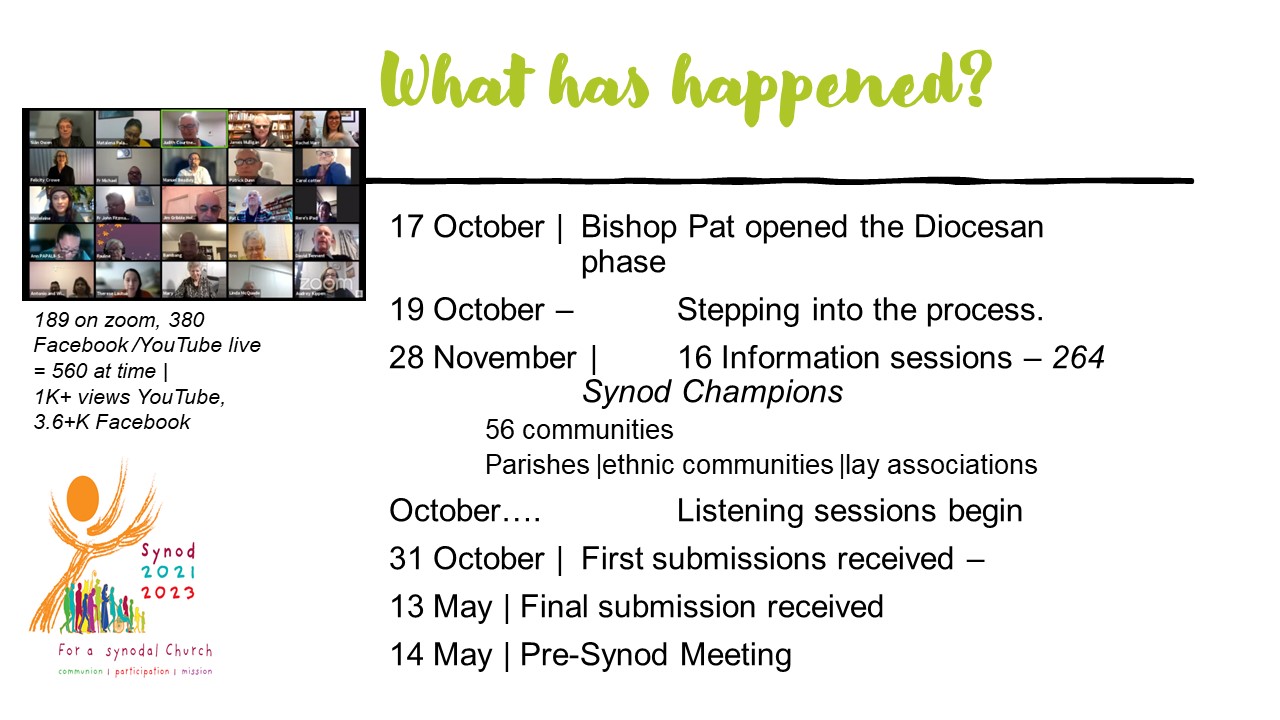 Prayer for the Synod

Every session of the Second Vatican Council began with the prayer Adsumus Sancte Spiritus, the first word of the original Latin, meaning, “We stand before You, Holy Spirit”.  This prayer has been historically used at Councils, Synods and other Church gatherings for hundreds of years, and is attributed to Saint Isidore of Seville (c. 560 - 4 April 636).  This version is a contemporary one written in a syntax that makes community reading easier.  It has been translated into Te Reo by the diocesan Vicar for Māori.

We stand before You, Holy Spirit, e te Wairua Tapu
as we gather together in Your name.

With You alone to guide us,
make Yourself at home in our hearts, o mātou ngākau
Teach us the way we must go and how we are to pursue it.

We are weak and sinful; do not let us promote disorder.
Do not let ignorance lead us down the wrong path
nor partiality influence our actions.

Let us find in You our unity kōtahitanga
so that we may journey together to eternal life te oranga tonutanga
and not stray from the way of truth te ara o te pono
and what is right te ara o te tika.

All this we ask of You,
who are at work in every place and time,
in the communion of the Father te Matua and the Son te Tamaiti,
forever and ever.